© 2021 The Authors. This is an open access article distributed under the terms of the Creative Commons Attribution License (https://creativecommons.org/licenses/by/4.0/). See https://bio-integration.org/copyright-and-permissions/

The first biophotonic application can be dated back to the 16th century, when the optical microscope was invented to observe tissues. A few hundred years later, the 21st century is called “the age of photonic.” The advancement of photonic technology has enabled it to replace electronics in many areas, with some intrinsic advantages, such as broader bandwidth at higher frequency and faster speed with no mass [1]. Biophotonics, a new field covered extensively in areas where biology and photonics meet, has applications not only in the human body but also in fields such as agriculture [2, 3]. After transforming communication and data storage, photonics has continued its influence in life science. Its benefits penetrates our lives seamlessly before we know it. This short editorial does not cover the whole territory but instead serves as a modest attempt to focus on the medical application of biophotonics.

Photomedicine, the application of biophotonic applications in healthcare, is one of the most productive translational medicine areas. A photon has natural characteristics of noncontact sterile interaction, high-resolution, and the ability to carry rich information [4], making it an ideal candidate for therapeutic and diagnostic applications. Technologies to generate and manipulate photons have provided many new light sources to broaden the applications in both territories. The development of short-pulse high-power laser technology is a good example. For therapeutic applications, it has transformed the surgical application of medical lasers to be much more precise and less damaging; for diagnostics application, it has revolutionized nonlinear optical imaging with broadened spatial–temporal scales when compared with the traditional imaging tools, allowing people to see structures at another level in a noninvasive way [5–8]. Biophotonics impacts almost all medical domains. For example, as one of the most benefitted disciplines, ophthalmology has two of the most successful models used daily: optical coherent tomography for diagnostic purposes and laser-assisted in situ keratomileusis for surgery.

Besides constantly adopting new technologies, researchers have also dig into the light–tissue interactions to determine complications of clinical application over the past 30 years [9–13]. The complications of laser treatment in the 1970s have been reduced significantly with the understanding of this new biological process [9, 10] and the use of the right laser technology. Dr. Anderson paved the road for correct laser parameters for surgical purposes based on a tissue’s properties [10]. Dr. Jacques developed a Monte-Carlo simulation for biological tissues and made it an open-source project that enabled many excellent numeric modeling works [14, 15]. More recently, many complex experiments added to the bio-optical property knowledge base and improved medical procedures [11, 16, 17]. Depending on the response time scale and target size scale, light–tissue interaction has the following characteristic processes (Figure 1): photomechanical, photothermal, photochemical [12], and photobiomodulation [18]. Their work range and biological responses are significantly different. The photomechanical process needs a very high peak power laser to blast off local tissues with minimum heat effect (Figure 2). The higher the peak power, the shorter time required for the laser application; thus, less surrounding tissue damage occurs from the extra heat. It enables precision cuttings as a ultra-sharp knife, which is critical to saving vital functional biological tissues. Some examples of photomechanical processes are picosecond laser for tattoo removal in dermatology [19] and femtosecond lasers in eye surgeries [20]. Meanwhile, photothermal procedures [21–25] maximize the selective heat absorption of specific biological tissue to generate signals for imaging or achieve ablation or coagulation for treatment. The photochemical process works at the molecular level using relatively low-level intensity light (<1 W/cm2) to have an immediate effect on organelles. Photodynamic therapy (PDT) is a photochemical process that has applications in various medical fields [26]. It targets organelles, with delayed cell death in hours and healing response in days [12]. 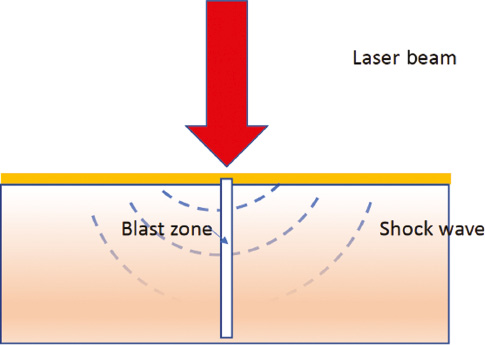 Last but not least, photobiomodulation, previously called low-level light therapy, has recently gained popularity in clinical applications and home therapy, owing to its safety, low cost, and effectiveness [18, 27]. It works at an even lower energy level than PDT. Dr. Endre Mester first discovered it in Hungary in 1967 when he tried to duplicate the laser treatment of tumors by Dr. Paul Edward McGuff in Boston, Massachusetts. However, the laser he used had much lower energy than the one used by Dr McGuff in Boston. Instead of killing cancer tumors, he saw the laser promoted hair growth and wound healing. Thirty years later, Dr. Michael Hamblin, at the Wellman Center of Photomedicine, noticed over 100% viability in the no-drug, light-only control group of PDT experiments. He has been dedicated to studying the mechanism behind the phenomenon ever since and led significant progress in the scientific discovery and medical application of photobiomodulation. In this case, light is not used as a tool but rather as a drug. A specific biomedical optical event may involve more than one of the processes above. It is not the clear differentiation of those processes by name that matters, but rather the understanding of the true nature of different biological responses does in order to improve the precision and enable the innovations of medical applications.

As a cross-disciplinary field, biophotonics is a natural platform for innovation. For example, researchers have taken advantages of the recently developed nanostructures to optimize imaging signals and improve drug delivery efficiency [6, 28]. Active investment in healthcare also contributes to the quick clinical transitions of biophotonic innovations. However, to genuinely and successfully improve people’s lives, many gaps have to be bridged. Horizontally, the gaps are between scientists from different fields to make new fundamental breakthroughs through knowledge merging; vertically, the gaps lie in scientists, engineer medical professionals, and physicists to make innovated, reliable, and practical products. Learning another field’s language is never easy; promoting this learning requires leaders to advocate communication and understanding among experts. Although it is still a relatively young field, with abundant success so far and booming innovations coming along, it is reasonable to expect giant waves of healthcare transformation involving biophotonics to continue for the next few decades.

Microbes in Oncology: Controllable Strategies for Bacteria Therapy an article on #ScienceOpen https://www.scienceopen.com/document?vid=b7691a57-6fd4-4dbd-9b5d-e4a13ab4621b

This website uses cookies to improve your experience while you navigate through the website. Out of these cookies, the cookies that are categorized as necessary are stored on your browser as they are essential for the working of basic functionalities of the website. We also use third-party cookies that help us analyze and understand how you use this website. These cookies will be stored in your browser only with your consent. You also have the option to opt-out of these cookies. But opting out of some of these cookies may have an effect on your browsing experience.
Necessary Always Enabled
Necessary cookies are absolutely essential for the website to function properly. This category only includes cookies that ensures basic functionalities and security features of the website. These cookies do not store any personal information.
Non-necessary
Any cookies that may not be particularly necessary for the website to function and is used specifically to collect user personal data via analytics, ads, other embedded contents are termed as non-necessary cookies. It is mandatory to procure user consent prior to running these cookies on your website.
SAVE & ACCEPT